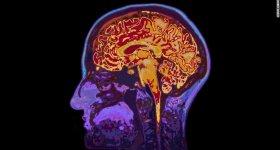 (CNN) – If you read a sentence (such as this one) about kicking a ball, neurons related to the motor function of your leg and foot will be activated in your brain. Similarly, if you talk about cooking garlic, neurons associated with smelling will fire up. Since it is almost impossible to do or think about anything without using language — whether this entails an internal talk-through by your inner voice or following a set of written instructions — language pervades our brains and our lives like no other skill.
For more than a century, it’s been established that our capacity to use language is usually located in the left hemisphere of the brain, specifically in two areas: Broca’s area (associated with speech production and articulation) and Wernicke’s area (associated with comprehension). Damage to either of these, caused by a stroke or other injury, can lead to language and speech problems or aphasia, a loss of language.

In the past decade, however, neurologists have discovered it’s not that simple: language is not restricted to two areas of the brain or even just to one side, and the brain itself can grow when we learn new languages.

More recent findings show that words are associated with different regions of the brain according to their subject or meaning. Neurologists aiming to make a three-dimensional atlas of words in the brain scanned the brains of people while they listened to several hours of radio. Different words triggered different parts of the brain, and the results show a broad agreement on which brain regions are associated with which word meanings — although just a handful of people were scanned for the study. Those taking part were all native English speakers listening to English. The next step will be to see where meaning is located for people listening in other languages — previous research suggests words of the same meaning in different languages cluster together in the same region — and for bilinguals.

Bilingual people seem to have different neural pathways for their two languages, and both are active when either language is used. As a result, bilinguals are continuously suppressing one of their languages — subconsciously — in order to focus and process the relevant one.
The first evidence for this came out of an experiment in 1999, in which English–Russian bilinguals were asked to manipulate objects on a table. In Russian, they were told to “put the stamp below the cross”. But the Russian word for stamp is “marka”, which sounds similar to “marker”, and eye-tracking revealed that the bilinguals looked back and forth between the marker pen and the stamp on the table before selecting the stamp.
And it seems the different neural patterns of a language are imprinted in our brains for ever, even if we don’t speak it after we’ve learned it. Scans of Canadian children who had been adopted from China as preverbal babies showed neural recognition of Chinese vowels years later, even though they didn’t speak a word of Chinese.

So whether we “lose” a language through not speaking it or through aphasia, it may still be there in our minds, which raises the prospect of using technology to untangle the brain’s intimate nests of words, thoughts and ideas, even in people who can’t physically speak. Neurologists are already having some success: one device can eavesdrop on your inner voice as you read in your head, another lets you control a cursor with your mind, while another even allows for remote control of another person’s movements through brain-to-brain contact over the internet, bypassing the need for language altogether.
For some people, such as those with locked-in syndrome or motor neuron disease, bypassing speech problems to access and retrieve their mind’s language directly would be truly transformative.

This article first appeared on Mosaic and stems from the longer feature: Why being bilingual helps keep your brain fit.